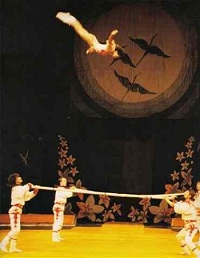 Lioudmila Fedoseeva is an NCCP Level 3 certified Artistic Gymnastics Coach with more than 30 years of competitive and professional gymnastics experience coaching Pre-Competitive through National and High-Performance athletes. Born in Russia, she began her competitive career at the age of 5 and became a successful member of the USSR National Team. Lioudmila competed successfully at numerous international events and achieved many medal wins. In 1975 she was the USSR National Champion on balance beam. Lioudmila was recognized as a potential Olympic Team member, and she holds the title of USSR Master in Artistic Gymnastics. Following a successful athletic career, she became a star performer and trainer with the world-renowned Moscow Circus touring internationally for 15 years including performances in Las Vegas, on Broadway, and Skydome. Since 1997 she has professionally coached gymnastics in Canada and offers many years of management experience.

Our new head coach, Karina, joined our team in 2018 after coaching for 5 years in Toronto. She has 18 years of combined coaching experience, including 4 years of coaching gymnastics in the United States. Karina is a former Ukrainian National team member, having competed internationally for 6 years and later being a part of the University of Oklahoma Women's Gymnastics team. Some of the career highlights include 3 place at World Cup in 2001 and Big Twelve conference champ in 2004. Currently Karina is working with pre-competitive and provincial level athletes at Northern Stars.